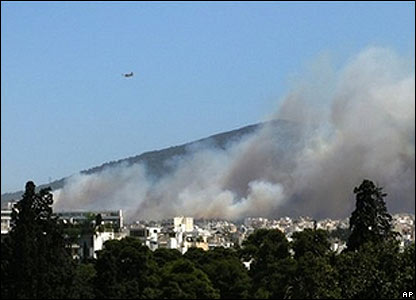 In Athens, too, major fires encroached on the city, and aircraft were called in to help dampen the flames.
photo from http://news.bbc.co.uk/2/hi/in_pictures/6963828.stm

A nationwide state of emergency has been declared in Greece, amid a rising death toll from raging forest fires.

Prime Minister Kostas Karamanlis said the country had to "mobilise all means and forces to face this disaster".

Officials say 47 people have died and many others may be trapped on the Peloponnesian peninsula. Police suspect many fires were started deliberately.

A 65-year-old man has been charged with arson and murder relating to a fire which killed six people in Areopolis.

And in the northern city of Kavala two youths have been detained on suspicion of arson.

Campaigning for the country's general election has been suspended. Analysts say the vote may have to be postponed.

The BBC's Malcolm Brabant, in Pyrgos, says radio stations are being inundated with calls from people in remote mountain villages saying they are surrounded by fire.

Meanwhile, many bodies have been taken to a mortuary in the city of Patras.

Our correspondent said relatives of the dead were sobbing quietly in the hospital corridors, waiting for a chance to identify their loved ones.

Almost 200 fires have been reported - there were about 70 new blazes during Saturday, while many others continued to burn from the previous day.

Strong winds have blown smoke and ash towards Athens 330km (200 miles) away, starting more fires and blocking out the sun over the capital.

The prime minister has promised to bring any arsonists to justice.

"No-one has the right to take human lives and destroy the environment... to destroy our country," said Mr Karamanlis.

Most of the dead came from villages near the town of Zaharo, on the west coast of the Peloponnesian peninsula.

At least nine people are reported to have burnt to death in their cars as they attempted to flee the flames near Zaharo.

The Associated Press news agency reported that a car had crashed into a fire engine, causing a traffic jam from which people could not escape as the flames advanced.

Fire crews said they had found at least 30 bodies in villages near Zaharo as they searched burned out cars and houses.

"It's a tragedy," an eyewitness told Greek television. "I can see the burnt bodies of a mother holding her child in her arms. Further away there are more bodies. It's terrible."

Emergency workers have been finding charred bodies in fields, homes, and in cars, including the remains of a mother clutching her four children.

Fire officials confirmed that three firefighters were among the dead.

A local official close to the scene described it as horrific.

"The situation is extremely dire... The speed with which this fire has been spreading is astonishing," said the mayor of Zaharo, Pantazis Chronopoulos.

Six deaths were confirmed in the seaside town of Areopolis in the Mani region of Greece's deep south. Hotels and several villages have been evacuated, fire officials said.

A hot, dry summer, with temperatures recently touching 40C (104F) has made much of the country vulnerable.

Firefighters have already battled ferocious fires this summer, but the current outbreak is thought to be the most serious for decades.

Some 500 soldiers have been sent to affected areas and the Greek government has appealed to its EU partners for help.

So far France, Germany, Spain, and the Netherlands have promised to send firefighting aircraft.

There has been widespread public anger at the government's response, which many have criticised as inadequate and slow.