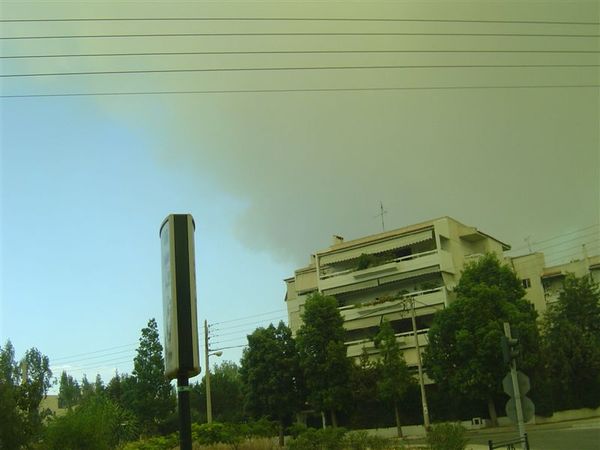 ATHENS, Greece (AP) -- A forest fire that torched thousands of acres of pristine pine forest and dozens of homes in the northern suburbs of Athens is now under control, fire brigade officials said on Friday.

The fire, fanned by gale-force winds, started early on Thursday and raced down the Penteli mountain, burning homes, cars and forest land, with the fire brigade struggling to stop it.

It took hundreds of firefighters and volunteers, airplanes and helicopters some 12 hours to confine it away from affluent residential areas in the suburbs of Nea Penteli, Melisia and Vrilisia.

"The fire has now been brought under control," a fire brigade official told Reuters. "As there are some small fire fronts we are still patrolling the area."

"More than 100 firefighters, 61 firetrucks and three helicopters are still in the area, ready to deal with any possible rekindling," he said.

Officials could not give details on the extent of the damage caused by the fire. But mayors at the suburbs said dozens of houses were completely destroyed while many others suffered severe damages.

"The destruction is very extensive. The response was very delayed and had there been a faster response the fire could have been contained much, much earlier," Melisia mayor Manolis Grafakos told reporters.

At least ten people were taken to hospital with breathing problems and a firefighter was injured on duty. The fire also triggered a series of power cuts throughout the capital.

Greece has seen some of the worst fires of the past decade this summer, caused by record-high temperatures, drought and arsonists.

In late June, the biggest national park near the city, on Mount Parnitha, burned for three days leaving more than a third of the nature reserve charred. E-mail to a friend